London Is An Influencer’s Playground

We’ve been ejected from the tallest building in the UK, twirled like a ballerina on the world’s most famous bridge and slinked like a London society icon around the ballroom of the Spanish Embassy. Ever since the term influencer entered the popular vernacular nothing – and no one – has ever been quite the same since.

I can’t say it was easy organising all this. First there were the accesses. (Sky Garden doesn’t allow tripods, nor do The Ivy, Scott’s, J Sheekey et al, or, evidently, The Shard.) Jose Pizarro, the Extramaduran restaurateur hosting his book launch at the Spanish Embassy, was abroad (but after four days “Of course!” I could bring the stylist, the photographer and grab a photo with Jose). I just wanted my (high octane) day in London depicted on my Instagram. Where was the PA? From the moment I’d picked my preferred photographer and begun ticking “Bleisure”, “Solo” and “Social” under my chosen vacation photography agency, aka Shoot My Travel, the anxiety turns to ardour.

I want to capture London like the influencers do. Not by just taking a picture, but BEING the picture. Fortunately, London is one great, epic, panoramic photo opportunity, and there’s an entire Insta-economy furnishing that. From fashion to architecture, drones and events to portraits and proposals, vacation photographers service every angle. Popular among women aged 25-35 and Insta-husbands – men who want to relax on their holidays rather than being relegated to the role of family snapper; wedding proposals and grandparents on intergenerational trips are also a burgeoning market, explains Valerie Lopez, CEO of Shoot My Travel, the agency I’ve enlisted to help with the task. 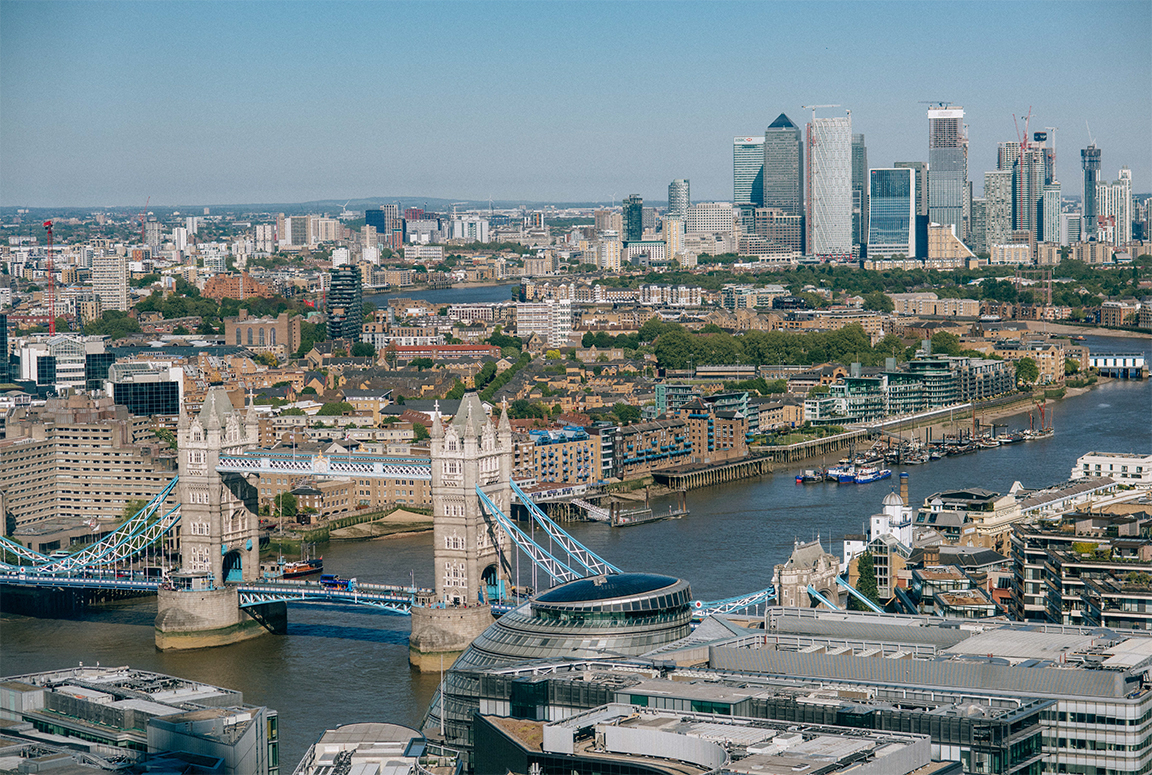 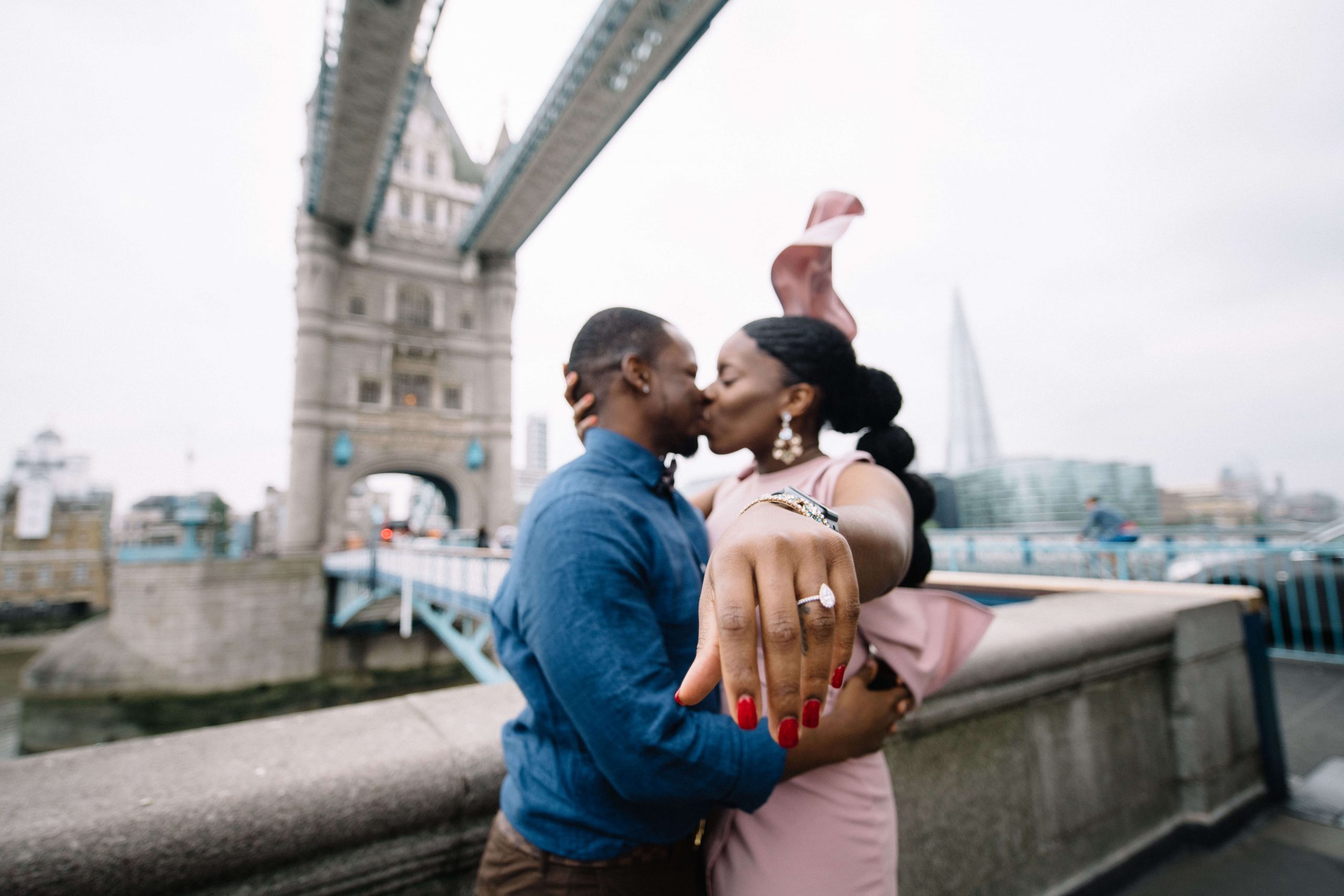 London is their leading – “it’s so pretty!” – Instagram location worldwide. Here, every event comes with a hashtag, you can book a grounded private jet on which to take your snaps and hire a stylist for a day to edit your wardrobe. Mine is left clamouring to change me out of the floor-length red Giambattista Valli dress and matching diamanté Jimmy Choo disco heels when our first location, Oblix at The Shard, promptly ejects us for taking photographs. The hair and makeup (I book Blow Ltd, a comprehensive beauty-to-you service available in central London, for my signature curls and a vampy, smoky eyed look that, apparently, all the influencers adopt) wears me well through the three hour shoot.

It used to be the case that anyone travelling with a photographer, makeup artist and stylist was famous or a model – today it just means they have an Instagram account, one realises, traipsing toward Tower Bridge, arguably the Holy Grail of holiday snaps. What’s more, those effortless-looking, carefree, arms outstretched to the sun, winking, blinking pictures, they’re not so natural, I learn, after being directed by my photographer to twirl amid a stampede of daytrippers and commuters upon the Gothic landmark. (Apparently, 7am is golden hour for grabbing a tourist-free shot on the world’s most famous bridge).I’ve practised walking in slow motion, tilted my head up, “turn to the left!”, looked down, “Close your eyes!” neighed like a horse (it relaxes the face), “Chin up, chin down!” while flailing my Lauder handbag to the skies outside the signature stuccoed facades of Kensington as my photographer – who’s shot Natalia Vodianova and Olga Kurylenko – has me spinning in a pink Roksanda dress. “Peggy Porschen!” she squeals, noting how its shade matches London’s most photographed cake shop. Other popular spots on the vacation photography trail include Biscuiteers and Neal’s Yard, while Sketch and Sushisamba vie for best backdrop among London’s aspirational eateries. Never has the brisk British wind seemed so seductive as when it’s billowing your dress on the banks of The Thames, nor has a double decker bus elicited such promise as when you’re trying to capture the quintessential postcard panorama. 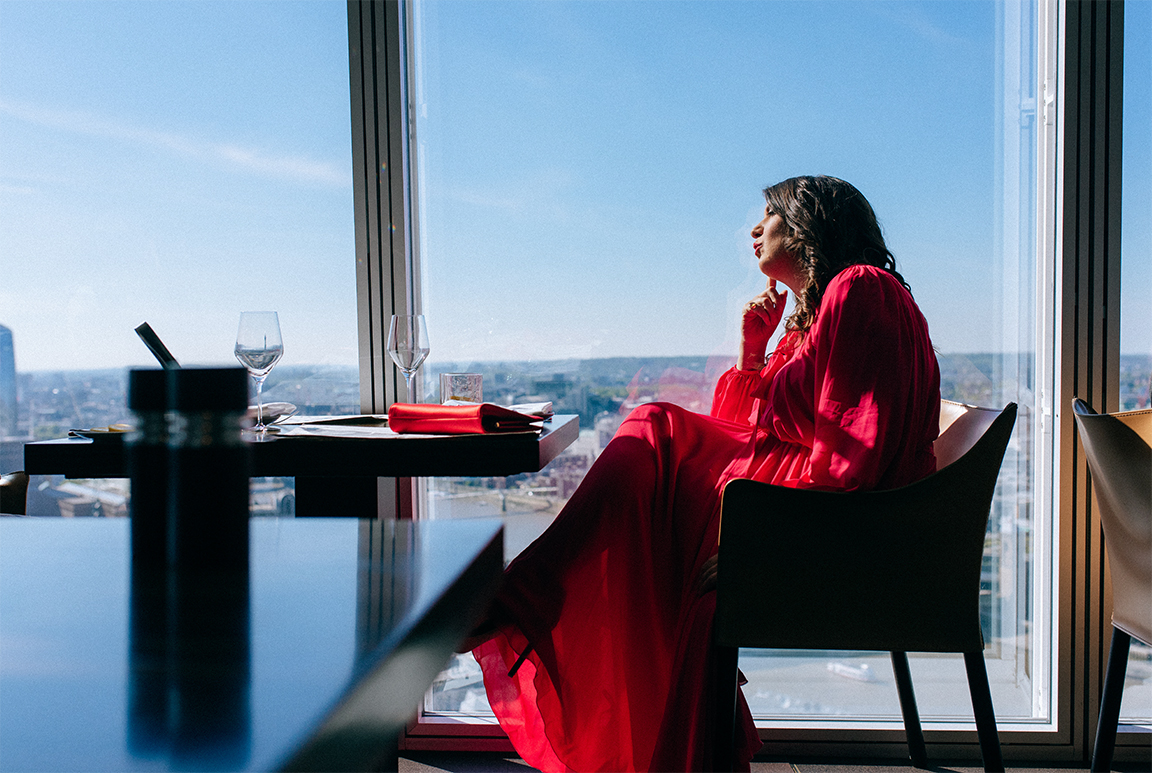 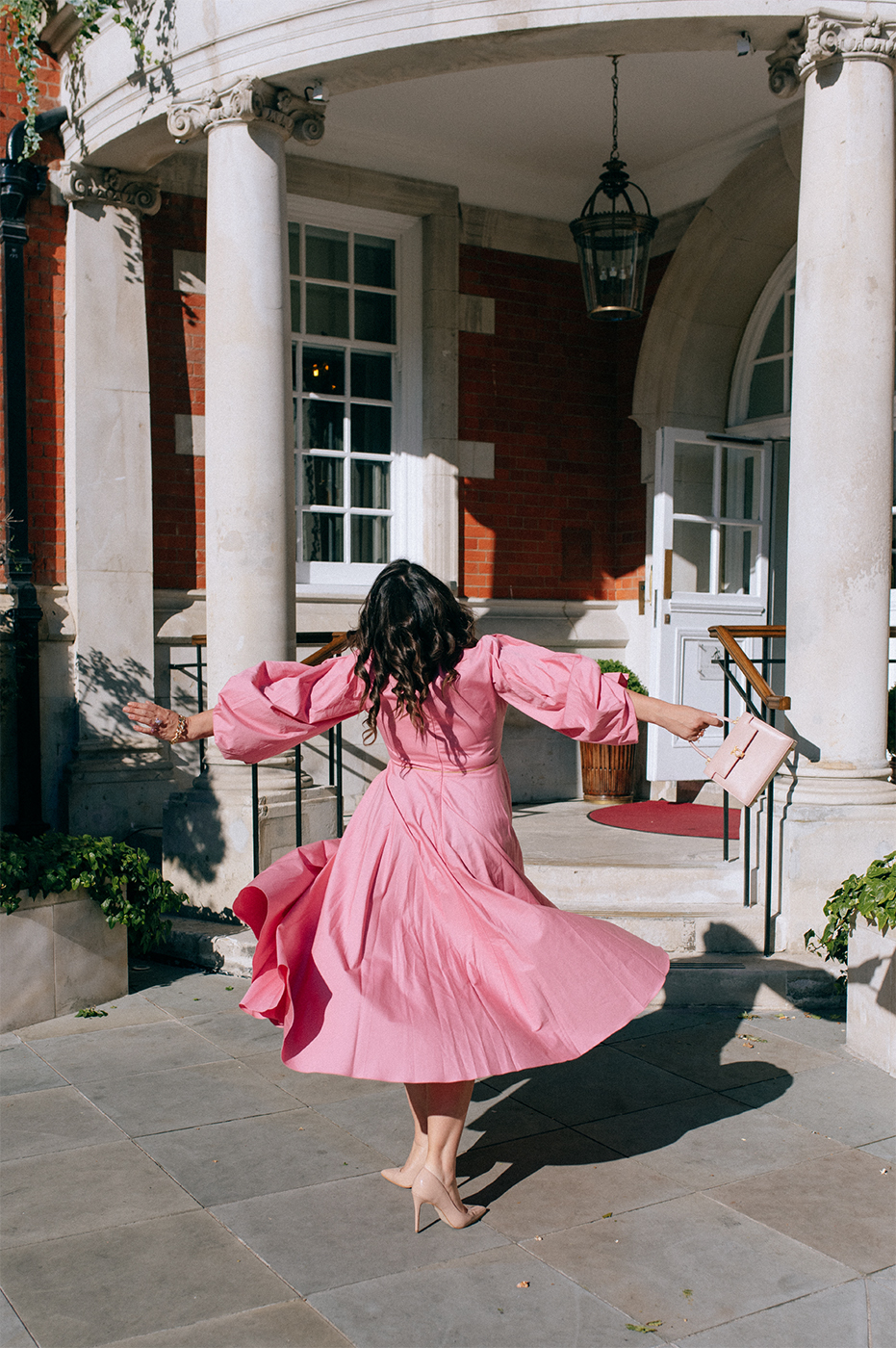 Scooping up my Little Bow Peep dress we head to our waiting car for the final costume change on our photo tour. Laetitia Tomasso is an influencer to the influencers and styles visiting celebrities when she’s not working on her own or others’ shoots. She treats me like a mannequin, from our aborted warm up high in the clouds to smoothing down the midnight blue caped, Peter Pilotto cocktail dress she’s chosen for my ambassadorial jamboree. As we enter The Spanish Embassy in Knightsbridge, I feel like I’m owning the lens.

Reclining across an oak banquet table, positioned between orchard-hued floral arrangements, the pearls of my dress refract off the magnanimous drop chandeliers in the ballroom, the gleam of jewellery glints off crystal Champagne flutes and the ripple of conversation seems to hush as we near (it transpires that a personal photographer plugs the gap where the silence of solitude falls at society events).

It’s now five hundred years since the advent of the miniature, and never has the fashion for tiny portraits been so in vogue. 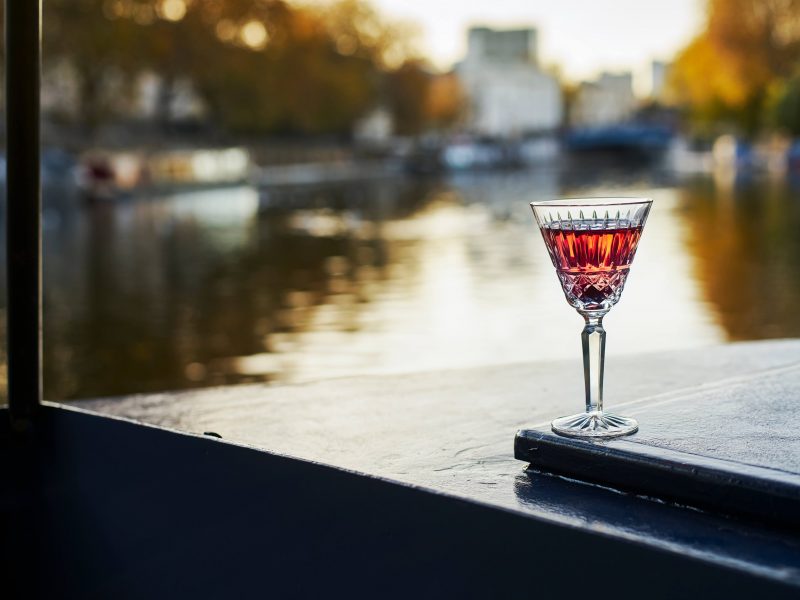 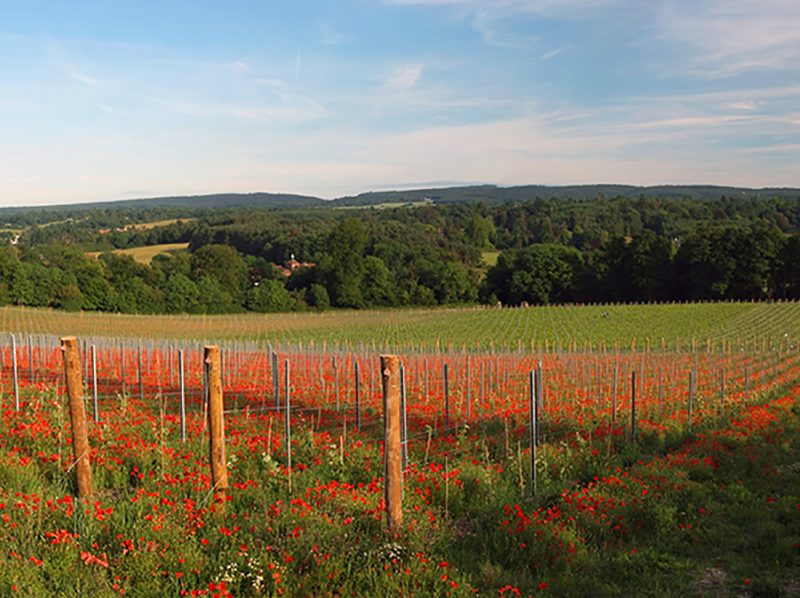